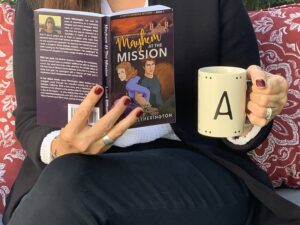 With her aunt, the Mother Superior, heading the monastery, Hannah should have no problem fulfilling her plan to become a nun. But what she finds while cleaning the private office of the new friar at Mission Santa Barbara is the first in a series of clues that gets her entangled with a Vatican art heist and a mysterious (and handsome) man named Will.

In her debut novel, Laura Eltherington takes readers on an energetic romp through the beautiful coastal city of Santa Barbara, California. Both a love story and a historical mystery, Mayhem at the Mission is the perfect read for anyone spending a day at the beach – or who wishes they were. Click through our ever-changing gallery to follow Hannah and Will in their journey through Santa Barbara.

CHAPTER ONE: Mirror, Mirror on the Wall

Only a few more days and Hannah Glouster would turn twenty-six. And after a quarter of a century, it seemed her future was finally set, and in a year she would be living full-time in the Poor Clares Monastery, training to be a nun. She would not be able to leave to see family and friends, run errands, jog to the beach or stop into the local grocery market. Looking at it from that perspective was alarming in every way, so Hannah took a deep breath and thought about her dreams. Since a young child she had always wanted to help others and live a pure and clean life. Church had always been one of her favorite places. Although her friends and family were very disappointed with her choice, she was sure this was her path in life. She would help those around her and spread God’s word.

Her wet hair wrapped tightly in a towel twist, she stared intently into the wide mirror on the wall of the small group bathroom. Nothing to write home about,she thought to herself. Her shoulder-length, tousled dark brown hair framed vivid hazel-green eyes, a pert nose and full round lips. She frowned as she scanned down her body. Her curvy body, full breasts and tiny waist had always embarrassed her. She pirouetted about and looked at her backside, annoyed with her rounded bottom. She jogged nearly every day in the hopes she would end up with a more boyish figure, but as of yet, she’d had no luck at all. She tightened her robe again and sighed. If only things could be easier.

Her parents had moved to Vancouver, British Columbia several months ago, and without a work visa, it was pointless for Hannah to move with them, although she felt lonely in their absence. So Hannah had recently entered the Poor Clares Monastery in Santa Barbara, California. Her father’s sister, Hannah’s Aunt Katherine, was the Mother Abbess at the monastery. Understanding Hannah’s life goal was always to be a nun, she had allowed her to move into the monastery, although it would be nearly a year before Hannah could prove her vocation and enter. She paid her room and board by working for Poor Clares and the mission, and on a moment’s notice, could be sent on any errand or job.

Aunt Katherine had always been Hannah’s favorite aunt. Only Katherine had ever really understood Hannah’s empathy for the poor and her need to help others and how it opened her heart and gave her joy. Countless times, Katherine had taken her to the Santa Barbara Rescue Mission, where they had volunteered serving dinners together while bonding. Spending family summers at their Lake Tahoe house as a child, she and Hannah had happily watched every single video of The Flying Nun, an ancient TV show her parents owned on DVD. They had laughed through Sister Act 1 and Sister Act 2, Whoopi Goldberg’s singing nun movies.

When Hannah turned thirteen, Katherine gave her The Assassini, a novel by Thomas Gifford, and she had fallen in love with it. A fictional novel, it took place in 1982 with Jesuit-trained lawyer Ben Driskill trying to solve the murder of his younger sibling, Sister Valentine, an outspoken activist in the church. The details about the strength, life and vitality of fictional Sister Valentine in Rome pushed Hannah even more into religion. Then just five years ago, Hannah had read an amazing story about the Italian actress, Olalla Oliveros. At the height of her career, this top Spanish model gave up everything, including her marriage, to enter the semi-cloistered Order of Saint Michael and become a nun. To Hannah, this final piece confirmed that she was meant to be a nun.

But nuns and sisters are not the same. Unlike active sisters in the church, nuns live tightly enclosed in monasteries and pray from dawn until after midnight. Not yet a cloistered nun, Hannah could work at the monastery or do errands outside and still live there. Right now Hannah could wear normal clothes instead of the standard habit and wimple seen on nuns. When eventually accepted into Poor Clares, Hannah would no longer have the freedom of leaving and working outside but would live and pray at the monastery full-time, only able to see outsiders through a grate or thin bars.

Hannah left the bathroom, went back to her small room and quickly dressed in her work clothes. Already done with early mass and a sparse breakfast, she checked her chore list. Sewing and ironing were next; neither of which she excelled at. Hannah had only the most rudimentary of household skills, and although she’d been studying in the order for nearly three months now, she’d barely improved any of them. Trying not to grumble, she headed downstairs and entered the workroom, then walked over to the workbench she had left in a mess last evening. There was a folded note on the bench addressed to her, and as she opened it her heart sank.

“Dearest Hannah,” it began. “Your work as I viewed it today was sloppy and unfocused. Please re-iron the entire pile of clothes on your bench. And please make sure it meets the community standards I have gone over with you multiple times. Yours in God, Sister Ann.”

Hannah’s face fell, and a tear trickled down her cheek. She would never finish her first year before becoming a candidate at this rate. (A candidate is someone who takes the first step in religious life before entering the novitiate and receiving the habit.) Exhaling, she turned on the industrial iron and put the first shirt in the pile on the ironing board.

Pay attention, Hannah, she told herself angrily. She set to the ironing with fervor; she’d make these clothes look brand new today.

Deep in the heart of Vatican City, near the headquarters of the Roman Catholic Church are the offices of the Vatican Museums’ administration, which safeguards, preserves, restores and promotes the monuments and artistic collections that are the property of the Holy See. They organize the museums into various departments according to the artworks kept there and the historical era they originated from. They also run a complete restoration workshop and an office dedicated to scientific research.

One of these departments is the Patrons of the Arts in the Vatican Museums, a group of people dedicated to preserving the vast and unique collection of art housed in the museums. These patrons have existed since 1983 when a major exhibition from the Vatican, “The Vatican Collections: The Papacy and Art,” went to New York, Chicago and San Francisco. They gained many people interested in helping restore the works provided by the Vatican for that exhibition. The department promotes awareness around the world of the artistic store of wealth and accumulated reserves of the church kept in the museums. It collects funds for the preservation and restoration of the same.

Today found this normally tranquil and slow-paced office exuding pandemonium from every corner. Rumors were swirling, growing. Were WWII-era destroyed masterpieces emerging into the global art sales market? Dario Paolucci, museum director, paced back and forth in his sunlit second floor office, overlooking Piazza San Pietro. He was furious, and he’d made that clear to the head of the restoration and archival department, Dr. Armando Bartolo.

“How in God’s name can a classic work of art marked ‘DESTROYED’ in the Vatican art archival database have sold for 4 million U.S. dollars in Los Angeles, California?” asked Dario. “It is not possible. Is our database incorrect, flawed, a joke?”

Dr. Bartolo was stressed, “I do not understand, sir. This seems fantastical. Our records have always been flawless, and they have never questioned the work of our archivist during the 30s and 40s in Germany. The painting sold was lost in a gallery fire in 1935. I have evidence that proves this.”

“Well, your evidence is shit,” Dario shrieked. “I’ve had the Papal Majordomo on the phone at the request of the Pope telling me to sort this out and fast. Call Luke Moretti, aid to the Los Angeles Bishop at the Los Angeles diocese, and have him investigate. He is an expert in that era of famous artists and their work. Tell him you need answers and need them now!”

Dr. Bartolo exited the office, the silent stares of the entire office burning into his back as he sprinted out in a panic.